To me, the most disturbing and distasteful feature of the Sunnyvale Palo Alto Medical Foundation, designed by Hawley Peterson Snyder, is the nonchalant placement of the Parking Garage Exhaust Vent adjacent to an 80-year-old woman’s home which was omitted from study in the PAMF DEIR/FEIR.

During the June 23, 2009 Council Hearing, a compelling speaker, Trustee Robert Varesio, implored “The Planning Commission would not address or answer my questions about persistent proximate exposure.”

END_OF_DOCUMENT_TOKEN_TO_BE_REPLACED 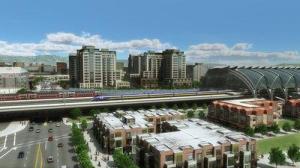 Echoing previous studies, a report released Monday by the California High-Speed Rail Authority concluded that there is no viable tunnel option to accommodate high-speed trains below downtown’s Diridon Station.   END_OF_DOCUMENT_TOKEN_TO_BE_REPLACED

Once again, a judge on Thursday ordered the state to scrap its plans to zip high-speed trains from Gilroy to San Jose and up the Peninsula, saying officials failed to show how the massive route would harm local traffic and homes.

Even so, the California High-Speed Rail Authority signaled it would reapprove the route along the Caltrain corridor after completing more studies to appease the judge. That could trigger yet another lawsuit, extending a three-year long legal battle against the polarizing $99 billion bullet train project.

The cities of Palo Alto, Menlo Park and Atherton don’t want the elevated tracks to divide their communities, create an eyesore and lower property values. So they sued in October 2010 to ax the Bay Area route for the San Francisco-to-Los Angeles line. They prefer a railroad that would run through the East Bay and across the Dumbarton Bridge to San Francisco.  END_OF_DOCUMENT_TOKEN_TO_BE_REPLACED

For those who did not support Measure A, you won!

Battle Heats Up Over How to Choose a Mayor in Sunnyvale

Opponents of a controversial ballot measure in Sunnyvale that would allow residents to directly elect their mayor are accusing developers of hijacking the issue for their own benefit.

Those battling Measure A worry that big-money contributors who help put a mayor into office will expect to be rewarded with lucrative contracts and favors in return.

The measure’s critics say the proof lies not only in the generous campaign contributions from mostly out-of-town developers and builders but also in what some are calling the proponents’ flagrant effort to mislead the public before Tuesday’s election.  END_OF_DOCUMENT_TOKEN_TO_BE_REPLACED

Posted on November 4, 2011 | Enter your password to view comments.

Pat Meyering, David Whittum and Steve Hoffman are Sunnyvale Citizens working  for your best interests. In fact, contrary to their opponents, their campaigns are self-funded in order to exercise an objective thinking decision-making process to benefit you, not special interest groups.

Special Interest Watch is a valuable resource to discover who has, and is, funding the past, current and future City of Sunnyvale Council Members. When you review Special Interest Watch, ask yourself “Did the Council just vote on my behalf or the party to whom contributed to their election?”   END_OF_DOCUMENT_TOKEN_TO_BE_REPLACED